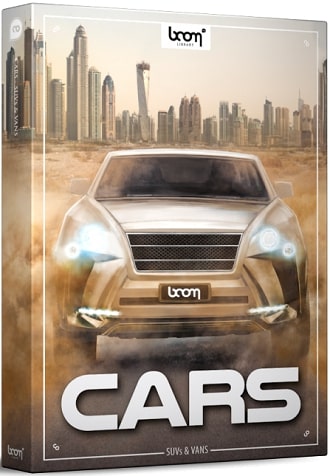 Description : CARS – SUVS & VANS: THE SOUND OF BIG WHEELS
After our first CAR EVERY CARS sound effects library, we release the second edition of our popular CARS series: powerful SUVs and vans appear! Clip on and hold on tight to a huge collection of large wheels, including the Hummer H3, Porsche Cayenne, Hyundai H1, Landrover Defender, Mercedes Benz Sprinter, Mitsubishi Outlander, VW Caddy – and others on this list.

A TON OF DRIVING AND FOLEY SOUNDS
Each of these cars comes with detailed individual mechanical characteristics. We combined long takes of multi-channel car engine sounds and drive-bys with a comprehensive collection of interior handling sounds such as indicators, ventilation, pedal break, seatbelt and whatever you can think of. Our sound designers covered the entire range of possible car sounds.
MULTI-CHANNEL RECORDINGS FOR YOUR CUSTOM MIX
We recorded each car with a multi-channel setup. You get the same take recorded from three different positions (exhaust, engine, interior) to expand your mixing possibilities and to shape the sound exactly the way you want.
WHAT WE RECORDED
GASOLINE:
Hummer H3 I5 3.7 (2007)
Porsche Cayenne V6 3.6 (2011)
Mitsubishi Outlander 2.4 (2008)
Hyundai H1 2.4 (2011)
VW Caddy 1.6 (2011)
DIESEL:
Landrover Defender 2.4 TDI (2007)
Mercedes-Benz Sprinter 3.5 TDI (2011)
Toyota Landcruizer 3.0 TDI (2011)
Volvo XC60 5I 2.5 TDI (2011)
WHAT’S SO SPECIAL ABOUT THIS SOUND FX LIBRARY?
We used our super-quiet test track in South Africa to deliver the most clean and bright recordings to push your projects to the optimum. The test track lies within the South-African desert so we have perfect recording conditions: no traffic noises, asphalted track, no bird noises. We bet you’ll appreciate the clean and bright character of the sounds when putting them in your projects.
COMPATIBLE SOFTWARE
BOOM Library sound FX come as WAV files, meaning you can import and work with them in any software that can handle this file type. Here are the most common audio and video editing software tools that work perfectly with our sound FX.

You need register Gold Plan to download it
Go to https://freevideoeffect.com/register/